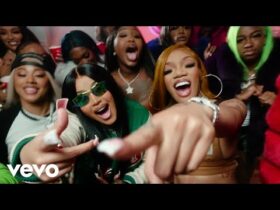 GloRilla Team Up With Cardi B For Incredible Hip Hop Track, “Tomorrow 2”

American synthpop band, Future Islands has released their new single named ‘Thrill’ from their upcoming album ‘As Long As You Are‘. Watch the video below.

The new album ‘As Long As You Are‘ will be released on October 9 via 4AD. The band co-produced the new album with engineer Steve Wright. Meanwhile, the album marks the first with drummer Mike Lowry as an official member and songwriter, joining the founding trio of Herring, William Cashion, and Gerrit Welmers.

On the new album’s release date, Future Islands are set to play a special ticketed Livestream show from their hometown of Baltimore, with tickets on sale now. You can pre-order the album by clicking here.

Check out the full tracklist of new album, “As Long as You Are” here: