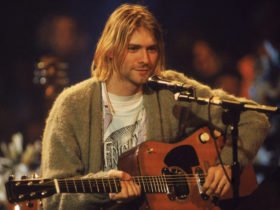 South Korean singer and actress, IU has teased the first look of her upcoming brand new single, ‘Coin.’ Watch the full teaser below.

The track, ‘Coin’ is taken from her new upcoming album, ‘LILAC.’ “I can’t die / I’m all-in”, IU sings in the visual teaser over a horn-laden harmony, seeing in the mirror a confident and charismatic image of her. The teaser features scenes of the singer at a poker table and a snippet of slick choreography.

Earlier this month, IU also released previews for ‘Flu’ and the album’s other title track, ‘LILAC’. Both the song and teh album are set to be released on March 25. In the meantime, In 2019, she released the mini-album ‘Love Poem’, which featured the tracks ‘Blueming’ and ‘Lullaby’, and released the single ‘Eight’ featuring Suga of BTS last year.

Earlier this month, IU released the tracklist for ‘LILAC’, revealing that the album will include a collaboration with Soth Korean R&B singer DEAN on the song ‘TROLL’.