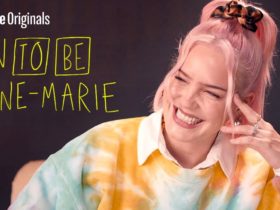 Watch ‘How To Be Anne Marie’ Youtube Documentary, Also Listen To Her New Song, ‘Problems’

YouTube released its chart rankings for the week of March 12-18 on Sunday (March 21st), with ‘On The Ground’ topping the chart based on the highest number of streaming. Rosé’s solo debut became the most-watched music video on YouTube in the same week with 121million views.

Meanwhile, ‘On The Ground’ ranked at number nine on the UK and US charts. The K-Pop singer also made it to the number one spot on YouTube’s Top Songs chart in both South Korea and Australia.

Earlier this month, She released her first exclusive track, ‘On The Ground‘ She announced that she will release her debut solo album this month while sharing the two album cover teaser poster from the upcoming album on Instagram. In Jan, Rosé first announced her solo project with a 30-second visual teaser.

ROSÉ ‘On The Ground’ Out Now! Like This Track? Stream & Download The Full Song By Clicking Here.