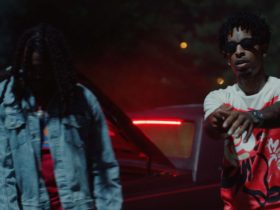 Korean girl group BLACKPINK’s singer, ROSÉ has released her first exclusive track, ‘On The Ground‘ – Watch the full video below.

Earlier this month, She announced that she will release her debut solo album this month while sharing the two album cover teaser poster from the upcoming album on Instagram & mentioned that the first-ever solo project will release on 12th March, and now the track has finally arrived.

The song, “On The Ground” with lyrics entirely in English, is about realizing that what is really important is within oneself. It was produced by Teddy and 24 in collaboration with producers Jorgen Odegard, ojivolta, and Jon Bellion.

On the other hand, Blackpink’s Jisoo, Jennie, Lisa and Rosé has entered the Guinness World Records with the music video for 2020’s “How You Like That,” which set five YouTube viewing records.

In Jan, Rosé first announced her solo project with a 30-second visual teaser. It also included an audio snippet of ‘Gone’, the B-side of the upcoming project which she later debuted live during BLACKPINK’s first virtual concert, The Show.

ROSÉ ‘On The Ground’ Out Now! Like This Track? Stream & Download The Full Song By Clicking Here.