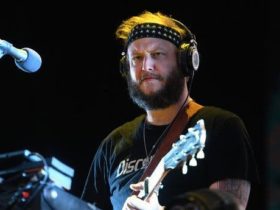 Canadian singer & songwriter, Justin Bieber has announced that he is going to release his first single, ‘Hold On’ from the upcoming album this Friday. Check out the post below.

He shared the cover art of the new single via Twitter and also shared the pre-save link of the track – Click_Here.

Recently, he has announced his new album, ‘Justice‘ will release on 19th March. It will include Bieber’s 2020 songs “Holy” (featuring Chance the Rapper), “Lonely” (featuring Benny Blanco), and “Anyone.” Now the another single is on the way.

MUST READ – Watch Pale Waves New Music Video, ‘You Don’t Own Me’

Justin Bieber says about the album, “In a time when there’s so much wrong with this broken planet we all crave healing and justice for humanity. In creating this album my goal is to make music that will provide comfort, to make songs that people can relate to and connect to so they feel less alone.”

“Suffering, injustice, and pain can leave people feeling helpless.” He added, “Music is a great way of reminding each other that we aren’t alone. Music can be a way to relate to one another and connect with one another.