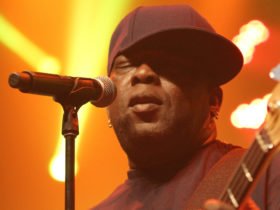 American singer & songwriter, Lady Gaga has revealed that she will be a Star in the ‘Joker’ Sequel movie alongside Joaquin Phoenix. Check out the full teaser below.

Today, On the 4th Aug, Gaga shared the clip via Twitter and wrote that “Joker: Folie à Deux 10.04.24.” In the clip, we see silhouettes of Phoenix and Gaga’s yet-to-be-announced character dancing together to the song “Cheek to Cheek,” which Gaga famously covered alongside Tony Bennett.

In addition, Currently, Gaga is touring with The Chromatica Ball, which kicked off in July in Düsseldorf, Germany. 90% of the tour has officially sold out, fans can still get any remaining tickets on Gaga’s website.

In may[This year], Lady Gaga released her single named “Hold My Hand.” It appeared in Tom Cruise’s movie “Top Gun: Maverick,” which premiered on May 27.

READ MORE – How Tall Is Bruno Mars? 10 Amazing Facts Of Him

Lady Gaga Reveals She Will A Star in ‘Joker’ Sequel