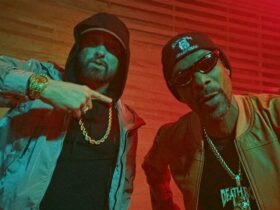 Eminem Collaborates With Snoop Dogg For New Hip Hop Banger, “From The D 2 The LBC”

Speaking about the track, it sounds like motoring toward an EDM mainstream crowd, It seems like we are at the music festival, also, it is an ode to single living that sounds perfect for that environment.

The vocals come up, “Up down like a pogo / Don’t really care where I go though / Just far away from commitment / I’m young, free and I’m living.”

In the meantime, recently, Martin Garrix & Maejor dropped their latest AREA21 track named ‘La La La.‘ The track is the first single from their forthcoming debut LP. Also, Garrix teamed up with Bono & The Edge for the new single, ‘We Are The People.’