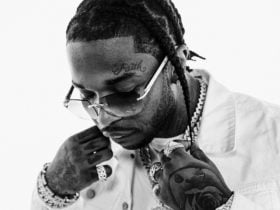 MUST READ – What Goes Into Starting A Music Record Label

On 14th Aug, she first released her first track, Midnight Sky, which was inspired by female music icons together with Stevie Nicks, Joan Jett, and Debbie Harry. Then earlier this month, she released her latest single, ‘Prisoner‘ featuring Dua Lipa.

After release, she wrote about the album on Instagram, ‘My PLASTIC HEART is overwhelmed by the support I’m receiving tonight! I was fucking born to make the record I’ve just released! To my fans who have been here from the beginning I appreciate you more than I can properly articulate. To anyone I’ve ever loved or lost.’

In a recent interview with Apple Music’s Zane Lowe, Miley recounted how Billy Idol’s works had inspired her album and attitude. “His music… the way that he married rebellion but also his music where he had incredible hooks. And he showed me that I could have balance, that I could make music that I and other people love,” she said. “And sometimes I’ve lost that and I’ve found that again where it’s like, ‘I want to make music for me.’”