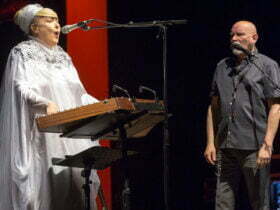 The band recently parted ways with founding bassist Ross Valory and longtime drummer Steve Smith. Randy Jackson, the former American Idol judge, who temporarily replaced Valory and played on 1986’s Raised On Radio album and the subsequent tour, will return to play bass for the band.

The new JOURNEY lineup carried out a socially distanced mode of version “Don’t Stop Believin'” for UNICEF USA‘s digital event  “UNICEF We Won’t Stop”, which aired Saturday night time (May 23) on MSNBC. Also showing with the band as keyboardist and vocalist Jason Derlatka.

The American guitarist Neal Schon shared a post on Instagram with the caption, “Ok Friends word is out! @randyjackson RJ the Big Dawg is our new Bass player again ???”

The band journey was about to kick off a North American tour earlier this month but it had to cancel the tour due to the COVID-19 pandemic.

Schon also announced that Narada Michael Walden will be the band’s new drummer. Walden is also an acclaimed producer; he has produced records for Whitney Houston, Mariah Carey, and Steve Winwood, among others.