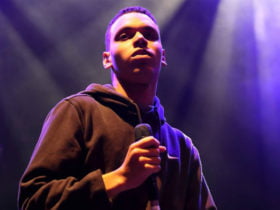 The American musician RZA has released his new hip hop track called ‘Be Like Water.’ – Listen Below.

RZA said in a statement, “Bruce Lee’s teachings extended beyond physical martial arts. He was full of philosophy and mindfulness”.

“His quote ‘Be water my friend’ is profound and multi-tiered in the definition. It inspires the idea that in adapting to life situations, sometimes we have to flow smoothly as a stream, while other times we have to crash like a tsunami.”

In an interview with The Undefeated for an ESPN special about Lee due to air today (June 7), Be Water, RZA went deeper on the actor’s impact. “Those films together were pivotal sources of inspirations for me,” he explained.

“Think about it, there’s an incorporation of the white karate guy with John Saxon, the black martial arts brother with Jim Kelly and Asian with Bruce Lee. They were all working together against the oppressor who was poisoning the people. If you add in a few other elements, that’s our country, bro!”