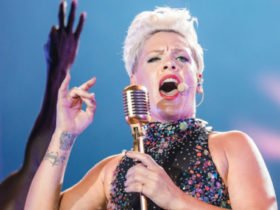 The American rapper Tekashi 6ix9ine has teamed up with Akon for ‘Locked Up Part 2‘ after 16 years of it’s the original. – Check out the post below.

The rapper, real name Daniel Hernandez has shared a video clip on his Instagram account with the caption, “LOCKED UP PART 2 IM ON ALBUM MODE ??? THIS ALBUM GOING CRAZYYYYYYY ??? @akon ????❤️???.”

“Thinking about the things that I did/ Got me thinking, like, why the fuck I did that?/ Got me wishing that I could take it all back,” 6ix9ine sings with Akon. “Fighting with these demons/ Barely even eating/ Barely even sleeping/ This shit got me tweaking’/ Fighting with my lawyers for a better offer/ Just want to see my daughter.”

Tekashi 6ix9ine Team Up With Akon

Last year, 6ix9ine pleaded guilty to racketeering and an array of other charges including conspiracy to murder and armed robbery, but his prison time was significantly cut after he testified against other members of the Nine Trey Bloods gang. He was granted an early release from prison in April after making a request to return residence with a purpose to keep away from contracting coronavirus while behind bars.

Meanwhile, Tekashi 6ix9ine has urged New York rappers to donate $100,000 to charity – and in the event that they do, he’ll match it. It comes after children’s charity No Child Hungry reportedly declined a $200,000 donation from the rapper earlier this month.

“We are grateful for Mr. Hernandez’s generous offer to donate to No Kid Hungry but we have informed his representatives that we have declined this donation,” the charity’s director of strategic communications said.