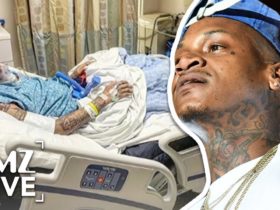 Canadian singer and record producer, The Weeknd has shared his new music video of the track, “Save Your Tears.” Watch the full video below.

The video is directed by Cliqua, produced by Roisín Audrey Moloney, executive produced by Jerad Anderson, it also continues the story lineup from previous After Hours videos.

He sings, “I saw you dancing in a crowded room / You look so happy when I’m not with you / But then you saw me, caught you by surprise / A single teardrop falling from your eye / I don’t know why I run away.”

Following the story of his album, in the “Heartless” video, the Weeknd trips and celebrations in Vegas. Then he gets bloodied-up from the “Blinding Lights” music video visual. From “In Your Eyes,” he’s decapitated. But in “Too Late,” his head becomes attached to another man’s body, and he is reanimated. then in recent performances, the Weeknd’s face was covered in bandages. The “Save Your Tears” video reveals the outcomes of reconstructive surgery.

Last month, Maluma & The Weeknd has dropped a new remix of their Papi Juancho track “Hawái.”

Watch The Weeknd – ‘Save Your Tears’ Official Music Video

Official music video by The Weeknd performing “Save Your Tears”– ‘After Hours’ available everywhere now: Click_Here.