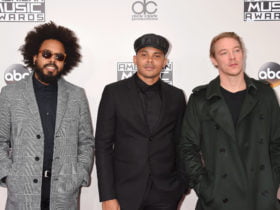 Earlier this week, David Guetta teased his upcoming event named, “United at Home – Paris Edition,” he mentioned in the teaser video, “Something special is coming, we started in Miami… We did New York City. Fans and support star united from all over the world raising money and doing good… And now, we united from My hometown.”

The event happened on New Year Eve Thursday, December 31st – 6 PM New York • 3 PM Los Angeles • 11 PM London • 3 AM Dubai • 8 AM Tokyo, In partnership with PlayStation France & Xiaomi France. Also, he urged everyone to take the coronavirus vaccine, he wrote on Twitter, “Get the vaccine’: French DJ David Guetta wants everyone to take the COVID-19 vaccine so the world can have a big mad party in 2021.”

David Guetta said, “After raising $1.5 million (USD) for charities and amassing over 50 million views in Miami and New York, “United At Home” continues from the iconic city of Paris with a phenomenal production in front of the Louvre museum’ glass pyramid.

He added, “In an effort to unite people around the globe, David Guetta is inviting everyone to join him in celebrating NYE and spreading the holiday’s spirit to benefit UNICEF, Les Restos du Coeur, and the Musée du Louvre.”

In the Meantime, In Sep, he joined forces with VR Platform Sensorium Galaxy to create new virtual concert experiences, The Sensorium Galaxy – a social VR platform. Last month, he & MORTEN unleased their latest EDM song, ‘Save My Life‘ featuring Lovespeake.

In Oct, he teamed up with Australian singer, Sia for the song ‘Let’s Love.’ On 11th Sep, They released the official audio of ‘Let’s Love’, It was produced during the quarantine months.