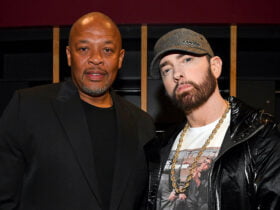 MUST READ – Watch – ‘How To Be Anne-Marie’ Official Trailer

Last week, She revealed about the new album project in mid-October before releasing the title track ‘Positions‘ with a new music video Directed by Dave Meyers. Meanwhile, in 2019, Ariana Grande also dropped multiple collaborations, including, “boyfriend” (with Social House), “Rule the World” (with 2 Chainz), “Monopoly” (with Victoria Monét), “A Hand for Mrs. Claus” (with Frozen and Uncut Gems star Idina Menzel), & a “Good as Hell” remix with Lizzo.

The album, positions marks her sixth studio album and her fourth record in last three years. In May, Grande featured on two massive songs: “Stuck with U” ft. Justin Bieber and “Rain on Me” Ft. Lady Gaga.

Also, Ariana & Gaga had performed their collaboration at the 2020 MTV Video Music Awards. In 2020, Ariana Grande performed “thank u, next” & “7 rings” at the 62nd Annual Grammy Awards. (She was also nominated for five awards at the ceremony.) Then after the Grammys, she had a cameo on SHOWTIME’s Kidding.

Along with her current solo work, Grande has co-written a variety of different collaborations. She developed “Ice Cream” along with her “7 rings” co-writer by Selena Gomez & BLACKPINK, and the song appeared on the K-pop group’s debut studio album earlier this yr.