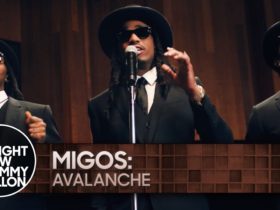 The album features 14 tracks including, Blame Myself, Heavenly Side, Fragments, Sideways, First Time, U & Me, Nightlight, Hearts On Fire, Lay It Down, Losing Patience, In My Mind, Paper Thin, Crazy Times, & Brave Soul.

According to Apple Music, It’s easy to understand why ILLENIUM, aka Denver’s Nicholas Miller, gets told his music helps fans through hard times. Call Fallen Embers, his fourth album, what you want—EDM-pop, future bass, chillstep—he’ll always get flak for blurring genre because he’s less interested in the genre than feeling.

So take his arena-rock whoa-whoa-ohs (the Matt Maeson-featuring “Heavenly Side”) and his neon-powered post-hardcore (the Annika Wells-featuring “Nightlight”) as reminders that the skin changes, but the heart underneath is the same. And remember that when the drops come, it isn’t just for the adrenaline rush, but to make a sonic metaphor of laying your burdens down and breaking through to something new.