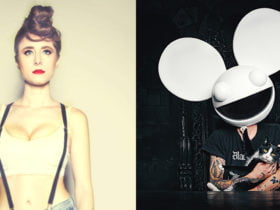 The Canadian rapper Drake & DJ Khaled has dropped a new music video of the track, “Popstar,” where we can see Justin Bieber appears in it. Watch the full video below.

In the video clip, DJ Khaled is bothering Drake to make a music video for the song ‘Popstar,’ through multiple shouty video messages. Then, Drake pings in a favor from Justin Bieber to star within the visual for him.

Drake wrote in an Instagram post about POPSTAR, “Thanks JB…I owe u you one,” then Justin Bieber replied, “Anytime.”

On 7th July, American DJ, DJ Khaled, and Canadian rapper, Drake teamed up for the new songs called ‘Popstar.‘ The track ‘Popstar‘ starts off with a Drake snippet that says “B******” before DJ Khaled proclaims, “We the best music!” Drake then exclaims “Another one!” as the swirling track unfolds with infectious beats.

Meanwhile, Drake also came on with Headie One for the track ‘Only You Freestyle,’ and Last month, he teamed up with Popcaan for the 2 brand new hip hop track named ‘ALL I NEED‘ & ‘TWIST & TURN.’ Drake’s forthcoming sixth studio album ‘Certified Lover Boy’, the follow-up to 2018’s ‘Scorpion’.

On the other hand, DJ Khaled has teased a forthcoming collaboration with Megan Thee Stallion, revealing back in July that the pair had “cooked something up”.