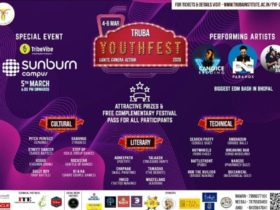 Truba Youth Fest 2020 Is Back With New Bang

American singer and producer, Selena Gomez has shared the tracklist of her upcoming Spanish ‘Revelación’ EP. Check out the post below.

The ‘Revelación’ EP features 7 new Spanish tracks including, previously released tracks, ‘De Una Vez (At Once)’ and ‘Baila Conmigo (Dance With Me)’, which featured Puerto-Rican rapper Rauw Alejandro and was produced by Bad Bunny.

She also revealed that DJ Snake and Myke Towers are collaborating on the EP’s songs ‘Selfish Love’ which DJ snake recently teased, and ‘Dámelo To.’ In Jan, she also teased her first-ever Spanish EP, ‘REVELACIÓN‘, which will be released on 12th March.

The EP – the follow-up to 2020’s ‘Rare,’ and will mark Gomez’s first project performed entirely in Spanish.