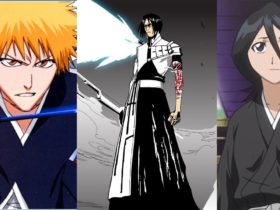 12 Most Famous Bleach Characters Of All Time

As you know, drummers are one of the essential parts of musical bands. We just can’t imagine the musical rhythm without drums. There have been numerous male drummers who are popular. But we can’t deny the fact that female drummers are ruling the industry for a long time.

Here we are presenting the list of the Best Female Drummers. The female drummer inspires young generations to follow the passion. Either a man or a woman can do whatever he/she wants to do. We have picked some of the amazing drummers, check out the list given below:

Cindy Blackman Santana is a jazz and rock drummer born in 1959. She has her first drum set at the age of 14. Cindy is one of the finest female drummers. She has worked with artists Bill Laswell, Ron Carter, Buckethead, Lenny Kravitz etc.

Maureen Ann aka Moe Tucker is an American singer and drummer. She started playing the drums at the age of 19. She has been a drummer of The Velvet Underground band. Moe gets popular for her unique style of playing the drums. She has worked with The Kropotkin’s, Half Japanese, John Cale etc.

Anika Nilles is a drummer, musician and composer. She belongs to a family that has drummers. At the age of six, she started playing the drums. Afterwards, Nilles posted the drumming videos. She becomes the sensational drummer. She has won three Drummie Awards and Music Radar awards.

Megan Martha White aka Meg White is a drummer, singer and musician. Initially, Meg works at a restaurant where she met John A Gills. She was a drummer of the renowned band The White Stripes. Indeed, She has received several accolades for her stunning skills.

Patricia Theresa Schemel is one of the renowned female drummers. She made various bands with her brother. She gets popular while working with the rock band Hole. Apart from this, Patty worked with bands like Sharkmuffin, Juliette and the Licks, Lucid Nation, Upset etc.

Sheila Cecilia Escovedo(Sheila E) is a singer and percussionist as well. She is also known as “The Queen of Percussion”. She started her career with funk-pop artist Prince. Her debut album Glamorous Life proved to be a successful piece of work. She gets fame with the singles Sister Fate, A Love Bizarre.

Hannah Ford Welton is a vocalist, musician and drummer. She started playing drums in the blues band of her father. She appeared in Welcome 2(a concert tour by Prince). Hannah has worked with Prince in the album 3rdeyegirl. She also taught playing the drums along with doing seminars.

Meytal Cohen is an Israeli-American drummer. She served two years in the military services of the Israeli Forces. After some years, she started her online Video project. Cohen is one of the founders of the heavy metal band “Meytal”. Heavy metal is a rock music genre that was emerged in US and UK.

Viola Clara Smith is considered to be one of the first professional female drummers. She was born on 29 Nov 1912. She started playing orchestra in Smith Sisters Orchestra. Later she played the drums. In fact, she was the fastest female drummer.

Sandy West was a musician, drummer, singer and songwriter. She had an interest in playing the drums at an age of six. She played in school bands and parties. Sandy with Joan Jett and Kim Fowley co-founded the female rock band The Runaways. She died in 2006 from lung cancer at an age of 47.

Karen Carpenter was a singer and drummer. She was a part of the duo “The Carpenters” with her brother Richard. Initially, Karen was the drummer, but due to her soft voice, she became the vocalist of the band. Close to You, Now & Then songs were the superhits. She died at the age of 32 with anorexia.

Terri Lyne Carrington is one of the finest female drummers. She is also a composer and producer. She belongs to a musical family. Terri is the winner of three Grammy Awards. Indeed, She has collaborated with renowned artists Lester Bowie, Everette Harp, Lizz Wright, Wayne Shorter and many others.

Janet Lee Weiss is a renowned rock drummer. She started her career as a drummer with the band The Furies. She is the co-former of the band Quasi. In fact, Janet made her position in various lists of appreciated drummers. She has also worked with bands Wild Flag, The Jicks, Sleater-Kinney, Bright Eyes etc.

Kate Schellenback is a drummer, musician and TV producer as well. She was a member of the band Beastie Boys. She was also a drummer in bands Lunachicks, Luscious Jackson, etc. Moreover, Kate is the producer of the popular show The Late Late Show.

Senri Kawaguchi is one of the renowned female drummers born in Japan. Kozo Sugonama(a Japanese drummer) instructs her the drumming skills. She released her solo album A la Mode at 16. Moreover, Senri has collaborated with Triangle, Jazz Avengers, Fragile, Tetsuo Sakurai etc.