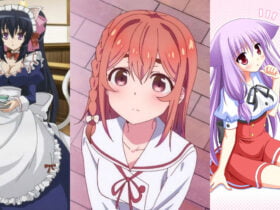 These Cute Cat Girl Anime Characters Will Steal Your Heart

Hey folks, how have you been? Today’s article is on death note characters. Do you know any of the Death Note characters?

If not, don’t worry! We have come up with every detail that you need to know about these popular death note characters.

As we all know, Death Note is a Japanese manga series written by Tsugumi Ohba.

However, Death Note centers around a high school student named Light Yagami, who discovers a supernatural notebook that allows him to kill anyone simply by writing the victim’s name while picturing his or her face.

Furthermore, The original manga series is divided into two parts.

Many adaptations are based only on Part I. Therefore, it was a little description of the Death Note. Now, let’s dive straight into the list of death note characters.

Albeit, the death note characters listed based on their popularity.

L, is a world-renowned detective who takes on the challenge of catching the mass murderer known as Kira.

In his investigation, L becomes suspicious of Light Yagami and makes it his goal to prove that Light is Kira.

However, speaking of his appearances, L is a very slim, pale, tall young man with messy neck-length black hair and black eyes.

One of his most noticeable features is the shadow below each of his eyes, a result of him being an insomniac. One of the most popular Death Note characters ever.

Light Yagami, is the main protagonist of the Death Note series. After discovering the Death Note, he decides to use it to rid the world of criminals.

His killings are eventually labeled by the people living in Japan as the work of “Kira.” Speaking of his personality, Light is characterized as hardworking, talented, and a natural genius.

He is highly perceptive and good with problem-solving skills. Light is a skilled planner and good at mapping out scenarios.

Ryuk, a Shinigami who indirectly gives Light Yagami a Death Note after becoming bored with the Shinigami Realm.

In an effort to amuse himself, he steals a second Death Note and drops it into the Human World for someone to find.

However, talking about his appearance, Ryuk has a fairly humanoid appearance. One of the most popular Death Note characters ever.

He is extremely slim and has light-gray skin, almost blue-ish in color, with spiky black hair; thin, blue-gray lips; and sharp, pointed teeth.

Personality-wise he is different from most Shinigami in that he does not want to simply pass time away in the Shinigami Realm but find something to relieve his boredom.

Misa Amane, is an up-and-coming model, actress, and supporter of Kira who eventually becomes the Second Kira.

However, After gaining a Death Note, she seeks out Kira in order to thank him for killing the man who murdered her family and to offer him her help.

Talking about her personality, Misa is very outgoing and is shown to be quite popular due to her career. She attracts a large crowd while visiting Light near his school.

She is hyperactive, impulsive, and otherwise childlike, evidenced by her tendency to speak in the third person.

Teru Mikami is a criminal prosecutor chosen as the Hand of Kira by Light Yagami.

Mikami takes ownership of Gelus’s Death Note after Light falls under suspicion of being Kira again, and needs someone to act as Kira without being given every order.

Speaking of his character, Considering Kira to be his God, Mikami is a devout Kira-worshiper.

His answer to a Kira’s Kingdom question that asked what he thought of Kira was simply “God.”

His loyalty to Kira is exemplified when he forces himself to stop questioning Kira after he perplexed by the task of creating and using a fake notebook.

Albeit, appearance-wise, Mikami is a young man with shoulder-length black hair, who wears glasses. One of the most popular Death Note characters ever.

His typical attire consists of a black trench coat over a business suit. Like many of the characters, he can be perceived as attractive.

Kiyomi Takada, is the former college classmate and girlfriend of Light Yagami, who later becomes Kira’s spokeswoman on the NHN television station.

Speaking of her appearance, Kiyomi considered being a very attractive woman with short black hair that is swept to the right and dark-gray eyes.

She normally dresses in formal clothing and usually wears bare-shouldered blouses with skirts or long pants.

She is sometimes seen wearing a jacket and red lipstick.

Rem, is a maid in service of margrave Roswaal L Mathers alongside her sister, Ram.

She is one of the main supporting characters of Re: Zero, with major roles in Arc 2, Arc 3, and Arc 7.

During the first half of Arc 2, she also served as the secondary antagonist.

She looks nearly identical to her sister apart from her hair, eyes, and ribbon coloring. One of the most popular Death Note characters ever.

Speaking of her character, Rem tends to speak in a superficially polite manner and sometimes acts without thinking. She holds both respects to the point of worship and guilt toward her sister as a result of a past incident.

Watari, is L’s handler and the supplier of logistics to the Japanese Task Force.

He is also the founder of Wammy’s House, an orphanage that has produced some of the best detective minds in the world, including L, Beyond Birthday, Mello, Near, and Matt.

Speaking of his appearance, Watari has white hair and gray eyes. When in disguise as L’s assistant, he wears a long black trench coat and a hat that covers his face.

On the other hand, talking about his personality, Watari is a famous inventor and the founder of Wammy’s House, an orphanage for gifted children in Winchester, England.

Using the fortune he made as an investor, he built an orphanage that teaches children with special talents and sends them out into the world.

Near, is the younger of L’s two successors, raised in Wammy’s House—Watari’s orphanage for gifted children in Winchester, England.

After L’s death, Near begins his investigation of the Kira case, gathering evidence over a period of four years.

Speaking of his personality, Near is very intelligent, although his childish appearance and demeanor can cause others, such as David Hoope, to question his abilities.

He has an obsession with solving complex problems and views an investigation as solving a puzzle. He is highly observational.

Talking about his appearance, Near is a young, slender, fair-skinned man with a petite build, gray eyes, and short, shaggy platinum blonde hair which he often plays with.

Stephen Gevanni, is an SPK member working for Near in order to catch Kira.

Talking about his appearance, Gevanni is a younger man with black hair. He lets his bangs hang down just over his light-blue eyes.

Albeit, speaking of his personality, Gevanni is very talented, having skills that include lock-picking, investigating, monitoring, and following suspects, and the ability to forge writing.

Touta Matsuda is a young member of the NPA and the Japanese Task Force. However, Matsuda’s police skills are lacking in experience, and at times, particularly in the beginning of the series, he somewhat impedes the investigation process.

Speaking of how he looks, Matsuda has black hair and brown eyes. His hair hangs over his ears with bangs that hang primarily above his right eye.

After the time skip his hair is shorter, though there is more hair covering his forehead. One of the most popular Death Note characters ever. Also, he has fair skin and is of average height.

Soichiro Yagami, is Light Yagami’s father, Chief of the NPA, and a police officer who initially leads the Japanese Task Force.

However, Soichiro is a fairly tall middle-aged man. He wears a pair of rectangular spectacles most time and dresses in formal Western clothing. He has a mustache.

Speaking of his character, Soichiro is a kind man with a strong sense of justice. He cares greatly for his family and the members of the Japanese Task Force.

He is a serious and responsible man that gains the respect of many.

Mello, is the older of L’s two successors raised at Wammy’s House, Watari’s orphanage for gifted children in Winchester, England.

When Roger asks that Mello and Near work together to capture Kira, Mello refuses, pointing out the differences between them.

He leaves the orphanage soon after and eventually seeks help from the Mafia.

Speaking of his character, While Mello is certainly a genius and more intelligent than most people, the concept of being only the second most intelligent person in Wammy’s House, behind Near, fuels the inferiority complex that defines Mello’s character.

Gelus is the Shinigami who gave his life protecting Misa Amane.

He appears in a flashback when Rem explains to Misa how to kill a Shinigami.

Speaking of his character, Gelus has a rare personality compared to most Shinigami, as he cares deeply for humans.

Gelus is kind and quiet and has the desire to help others. He fell in love with a human named Misa Amane and went as far as to kill a human to save her.

If we look at how he looks, He is a doll-like Shinigami whose appearance suggests that he was poorly sewn together from mismatched fabric.

Some of his skin is blue in color, and other patches are white.

He can speak through his stitched mouth, and more stitches extend across his body.

Shinigami are a type of Japanese death god. They are sometimes referred to by their literal translation “god(s) of death,” or by the Western equivalent “grim reaper(s).”

Do you know? Shinigami vary widely in appearance, and their bodies are built in ways that would seem impossible by Earthly standards.

Although some Shinigami do not appear to have limbs capable of holding objects, all Shinigami are able to hold and write in order to use their respective notebooks.

Shinigami are also capable of flight and use wings as a mode of transportation, especially in the Human World. When their wings are not in use, they retract.