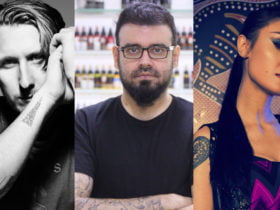 15 Best Tattoo Artists In The World

Hey guys! in this post, we are going to consider the most popular string instruments. As the name suggests, String instruments are musical instruments that have stretched strings and produce music when vibrated or plucked by fingers or picks.

Furthermore, these strings can be made up of silk, plastic, nylon, vegetable fibers, metal, or animal gut. A soundboard or resonator is used to amplify the sound of vibrating strings. Viola, Dulcimer, Lyre, and Mandolin are some examples of string instruments.

Let’s go and check out the list of 15 Most Famous String Instruments you must know about.

Viola is one of the renowned string instruments. In terms of construction and material, the viola is similar to the instrument violin. It is larger than the violin. The smaller-sized viola is also called an alto Viola.

In fact, the four strings of a viola are tuned in fifths. That is one-fifth below the violin and one octave above the cello. Strings are wrapped around a peg near the scroll.

Cello is a bowed string instrument that belongs to the violin family. Its other name is Violoncello. The four strings are tuned in perfect fifths from low to high. It mostly acts as a solo instrument as well as in ensembles like orchestras and string quartets.

The instrument has also an endpin that rests on the ground to support the weight. Its unique sound makes it popular in rock and pop music.

Violin is the smallest in the string instruments family. It has a hollow wooden body structure. The term violin comes from Italian Violino. Earlier, the instrument has a different name (Violetta) having two or three strings only.

Moreover, it has an hourglass shape that consists of two lower bouts, two upper bouts, and two concave C-bouts at the waist. Violins have been an important part of music. Be it folk music, jazz, rock, or classical music.

Harp is one of the renowned string instruments. People believe its existence in Europe, Asia, and Africa since 3000 BCE. There have been several kinds of harps regionally. Some of them are the Paraguayan Harp, Andean Harp, Jarocha Harp, Illanera Harp, Kafir Harp, etc.

Apart from these, there are also some other harps including multi-course, electric, chromatic-strung, and Celtic harps.

Double Bass or Bass is the largest bowed string instrument. It has four strings (sometimes five) and also possesses the lowest pitch. Bass is used in the orchestra’s string section, concert band, and classical music.

Not only this but it is also used in rock n roll, blues, tango, folk, jazz, etc. The musician can play double bass either with a bow(arco) or strings(pizzicato). Both arco and pizzicato are played in tango music or orchestral repertoire.

A guitar is a string instrument having six strings. It can have up to eighteen strings but that depends on the type of guitar. Guitars have a solid body and their strings are made up of steel, nylon, or gut.

Guitars can be categorized into two main categories i.e. Acoustic and Electric guitars. It is one of the most widely used instruments across the globe.

READ MORE- What Is Form In Music?

Kora is a string instrument that has twenty-one strings. Each string plays a different note. Its music sounds similar to a guitar and harp also. Only skilled players can play solo runs and ostinato riffs simultaneously.

This instrument is widely used in West Africa. The body of Kora is made up of gourd and covered with the leather of a cow, goat, or sheep. There are two sticks to hold it and play strings with the index and thumb.

The lute is surely one of the most popular string instruments. It has a neck with a deep round back and hollow cavity. At the end of the neck, the strings are attached so that each string plays a different note.

In fact, it came to Europe in the Middle Ages. It has a pear-shaped body with a wooden flat soundboard. Initially, Lute has four strings and in the 14th century, strings became pairs called courses. In the 16th century, It got six courses of strings, out of which the top one was called a chanterelle.

The dulcimer is a percussion-string instrument. It comprises strings stretched over a trapezoidal resonant soundboard. The musician strikes the strings with a spoon-shaped mallet hammer to produce music.

Indeed, The term dulcimer is derived from the Latin “Dulcis” meaning sweet, and the Greek “Melos” meaning song. Dulcimers are traditionally played in China, Iran, Korea, Iraq, India, Poland, Ukraine, the UK, the US, etc.

Mandolin is a string instrument that belongs to the lute family. A pick is used to pluck the strings and play music. Actually, It has four courses of doubled metal strings. That is tuned in unison and gives eight strings, five (ten), and six(12) strings course versions.

Mandolin is the soprano member of the family that includes the Mandola, octave mandolin, mandocello, and mandobass. Round-backed, archtop, and flat-backed mandolins are some of its most common styles.

READ MORE- 7 Best Music Streaming Services You Must Use

Biwa is a Japanese string instrument. It was popular in China then it came to East Asia and Japan as well. Biwa has a drop shape body with a short neck along with four strings.

In Japan, it is played by a hardwood stick called “Bachi”. It was previously used in narrative storytelling. There are several types of biwa according to the number of strings.

The lyre is one of the most famous string instruments. Lyre belongs to the lute family. There are three kinds of lyre instruments: Tube lyre, Bowl lyre, and Box Lyre.

On the other hand, a normal lyre is a yoke lute in which the strings are attached to a yoke. The number of strings varies from three to seven to ten strings depending on the region.

Banjo is another popular string instrument. People believe that the African people enslaved in the Caribbean and colonial North America created the Banjo around the 17th century.

In fact, it is an instrument with a thin membrane stretched over a cavity made of plastic or animal skin. The tenor and plectrum banjos are played with a pick while five-string banjos are played either with fingers or fingerpicks.

The national instrument of Japan “Koto” is derived from the Chinese zheng and se. It is made from Paulownia wood with thirteen strings over adjustable bridges.

Besides, Koto was introduced in Japan from China probably in the 7th-8th century. Initially, the bridges were built of ivory, but now plastic and wood are used to make them. There is a classical name for each koto part as it looks like a dragon.

READ MORE- 12 Best Ballet Music You Must Listen To

The rebab is one of the ancient string instruments. It consists of mainly three strings while it also has two to five strings sometimes. There are three types of rebabs: long-necked bowed rebabs, short-necked rebabs, and pear-shaped rebabs.

Further, Here we are talking about long-necked/round-shaped rebabs. There is a long neck with a peg box at the end along with two to three strings.